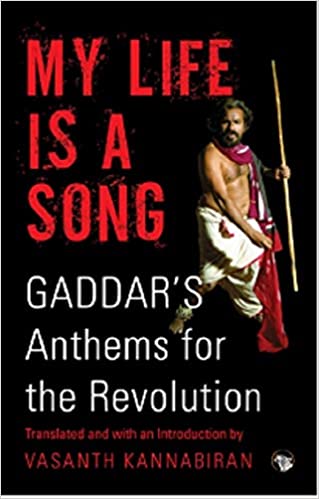 View cart “Catch That Moustache Thief!” has been added to your cart.

My Life Is a Song

Gaddar, poet, singer, revolutionary, is among the most well-known of the creative minds associated with people’s resistance movements in India. Born Gummadi Vittal Rao in 1947, in Tupran village of Medak district in what is now Telangana, Gaddar became an activist in his youth after dropping out of engineering college due to poverty. With a gift for singing and song-writing, he travelled the road—for some time underground—reaching lakhs of people with his music, and became the cultural face of ‘rebellion’, the literal meaning of his nom de guerre.

Of the thousands of songs Gaddar performed, only a few were ever recorded in print. My Life Is a Song brings together, for the first time in English translation, twenty-three representative songs, selected by his friend and fellow traveller, Vasanth Kannabiran. Translated from the original Telugu with an eye to Gaddar’s unique style and delivery, this selection takes the extraordinary ‘anthems’ of one of India’s greatest singer-poets—and a living legend of revolutionary thought—to a wider audience.