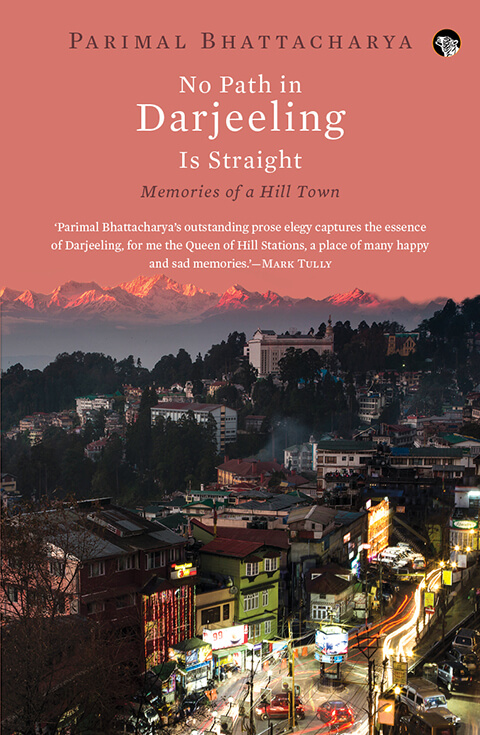 No Path in Darjeeling Is Straight

‘Parimal Bhattacharya’s outstanding prose elegy captures the essence of Darjeeling, for me the Queen of Hill Stations, a place of many happy and sad memories.’—Mark Tully

For a few years in the early 1990s—at a time when the embers of a violent agitation for Gorkhaland were slowly dying down—Parimal Bhattacharya taught at the Government College in Darjeeling. No Path in Darjeeling Is Straight is a memory of his time in the iconic town, and one of the finest works of Indian non-fiction in recent years. Parimal evocatively describes his arrival, through drizzle and impenetrable fog, at a place that was at odds with the grand picture of it he had painted for himself.

His first night there was spent sleepless in a ramshackle hotel above a butcher shop. Yet, as he tramped its roads and winding footpaths, Darjeeling grew on him. He sought out its history: a land of incomparable beauty originally inhabited by the Lepchas and other tribes; the British who took it for themselves in the mid-1800s so they could remember home; the Darjeeling Himalayan Railway—once a vital artery, now a quaint toy train—built in 1881; and the vast tea gardens with which the British replaced verdant forests to produce the fabled Orange Pekoe. In the enmeshed lives of his neighbours—of various castes, tribes, religions and cultures—lived at the measured pace of a small town, Parimal discovered a richly cosmopolitan society which endured even under threat from cynical politics and haphazard urbanization.

He also found new friends: Benson, a colleague whose death from AIDS showed him the dark underbelly of the hill station; Pratap and Newton, whose homes and lives reflected the irreconcilable pulls of tradition and upward mobility; and Julia and Hemant, with whom he trekked the forests of the Singalila mountains in search of a vanished Lepcha village and a salamander long thought extinct.

With empathy, and in shimmering prose, No Path in Darjeeling Is Straight effortlessly merges travel, history, literature, memory, politics, and the pleasures of ennui into an unforgettable portrait of a place and its people.