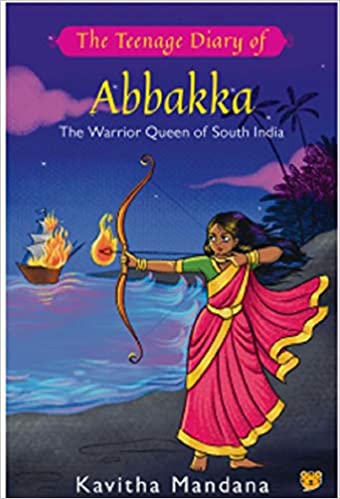 The Teenage Diary of Abbakka: The Warrior Queen of South India

The Chowtas ruled over Ullal and surrounding areas of coastal Karnataka. Many rulers in this dynasty were women, and at least two carried the name Rani Abbakka. They have gone down in history and folklore as fearsome warriors who fiercely defended their tiny kingdom, and repeatedly defeated the Portuguese. This is the story of Abbakka III.

Abbakka grows up knowing she will rule over the kingdom one day?the one that was ruled by her grandmother Abbakka II and her mother Rani Tirumala Devi. Abbakka trains with all her heart in everything a queen needs to know, and never tires hearing the tales of sea battles that her grandmother waged against the firangis. But Abbakka is also a young girl who loves adventure. She sets out on dangerous missions to track down spies on the seas. She accompanies her mother in a secret plan to outwit the Portuguese as they try to capture the kingdom’s precious pepper crop. And then there is the handsome, mysterious boy from Mangalore, who she likes enormously?

Steeped in the culture and history of the region, The Teenage Diary of Abbakka is the fictional diary of an unusual girl growing up during an exciting time?a girl who would eventually go to any lengths to protect and defend her kingdom.