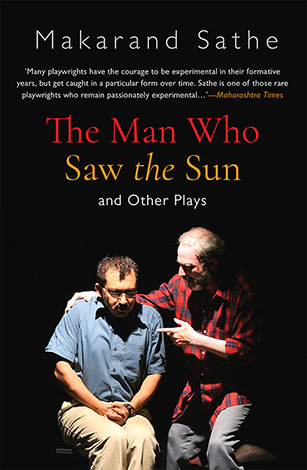 The Man Who Saw the Sun

?Many playwrights have the courage to be experimental in their formative years, but get caught in a particular form over time. Sathe is one of those rare playwrights who remain passionately experimental???Maharashtra Times

Among the most politically and socially engaged Marathi writers, Makarand Sathe is also a popular playwright. This volume brings together three of his best works in English translation.

They Went Ahead is set in a limbo-like space after death. The two characters can?t figure out how to leave it, despite seeing others moving on, all around them. Finally, they realize that if they rape a poor farmer?s wife, also stuck there, they will be able to leave?but how are they supposed to come to terms with their own consciences?

Various vivid characters are caught in a traffic jam in Crossroads. The impetuous Pratap, who has lost his job, wants a simple answer to help him understand the crisis he faces, but Achyut Athavale, a liberal thinker, can only offer him diverse and equally valid narratives. The other characters further enrich the narrative with their various preoccupations. But when the situation escalates into physical conflict, their many identities become two again?the violent and the non-violent.

The Man Who Saw the Sun explores questions of truth and justice using dialogues between famous figures from Ancient Greece, like Socrates?whose trial is at the core of the play?Xanthippe and Phaedo, which are observed by four present-day characters.

Thought-provoking yet always accessible, experimental yet lightened by a unique sense of humour, Makarand Sathe?s plays work beautifully across languages and media. This collection by one of India?s finest playwrights belongs on every theatre-lover?s shelf.