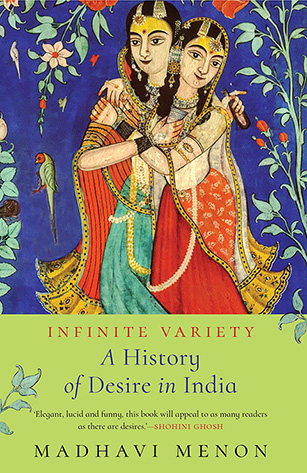 Infinite Variety: A History of Desire in India

‘The history of desire in India,’ writes Madhavi Menon in this splendid book, ‘reveals not purity but impurity as a way of life. Not one answer, but many. Not a single history, but multiple tales cutting across laws and boundaries.’ In Bhakti poetry, Radha and Krishna disregard marital fidelity, age, time and gender for erotic love. In Sufi dargahs, pirs (spiritual guides) who were married to women are buried alongside their male disciples, as lovers are. Vatsyayana, author of the world’s most famous manual of sex, insists that he did not compose it ‘for the sake of passion’, and remained celibate through the writing of it. Long hair is widely seen as a symbol of sexuality; and yet, shaved off in a temple, it is a sacred offering. Even as the country has a draconian law to punish homosexuality, heterosexual men share the same bed without comment. Hijras are increasingly marginalized; yet gender has historically been understood as fluid rather than fixed.

Menon navigates centuries, geographies, personal and public histories, schools of philosophy, literary and cinematic works, as she examines the many—and often surprising—faces of desire in the Indian subcontinent. Her study ranges from the erotic sculptures of Khajuraho to the shrine of the celibate god Ayyappan; from army barracks to public parks; from Empress Nur Jahan’s paan to home-made kohl; from cross-dressing mystics to androgynous gods. It shows us the connections between grammar and sex, between hair and war, between abstinence and pleasure, between love and death. Gloriously subversive, full of extraordinary analyses and insights, this is a book you will read to be enlightened and entertained for years.