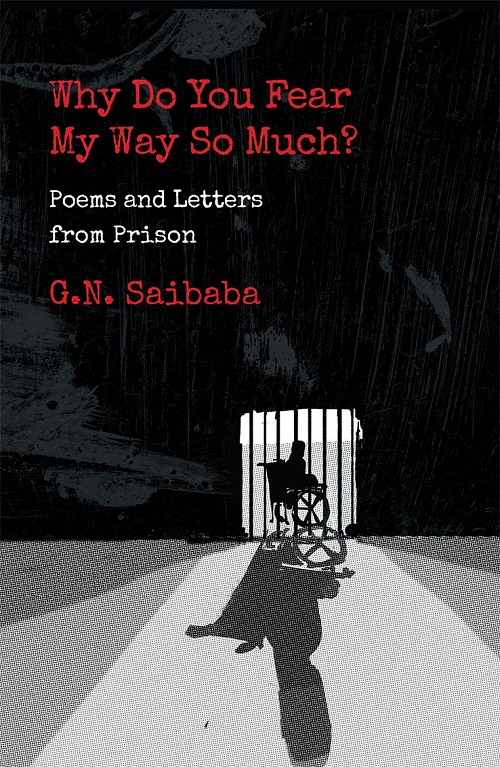 Why Do You Fear My Way So Much?: Poems and Letters From Prison

In the afternoon of 9th May 2014, a posse of policemen stopped a car in Delhi and pulled out a wheelchair-bound man on his way home from work. He was then flown to Nagpur, where he was arrested under UAPA (Unlawful Activities Prevention Act), the draconian anti-terror law. His wheelchair was damaged as he was hauled up and thrown into the police vehicle and the nerves of his left hand were injured, an infection that later spread and rendered both his hands virtually useless.

This man was G.N. Saibaba, professor of English at Delhi University, scholar, writer and human rights activist. In the eyes of the Indian government, he was a dangerous threat to the State, accused of ‘waging war against the nation’. In March 2017, the Gadchiroli Sessions Court sentenced him to life imprisonment for alleged links with a banned organisation, CPI-Maoist. Saibaba’s appeal against the judgement, challenging the police evidence and witnesses, has been pending in the Nagpur High Court for five years. Meanwhile, he is kept in solitary confinement, denied the medical care he needs.

What would cause government agencies to take such an action against a man paralysed by polio from the age of five, suffering from 90 per cent disability as well as a cardiac condition and chronic and severe spinal pain?

Born into poverty in the town of Amalapuram in Andhra Pradesh, Saibaba overcame his disability to top his university and become a highly regarded professor. From his student days, he has also been engaged in activism on behalf of victims of poverty and state violence, and played a significant role in the campaign against Operation Green Hunt, the notorious paramilitary offensive aimed at dispossessing Adivasi people of their habitat by force.

Is this what makes him a ‘terrorist’ in the eyes of the State?

Even as human rights organisations across the globe demand an end to his detention, Saibaba continues to believe in the possibility of a better world. The poems and letters in this book convey his innermost thoughts and feelings?anguish, hope, resistance, and resilience?and a vision of a just, equal and humane India that we all deserve and need.