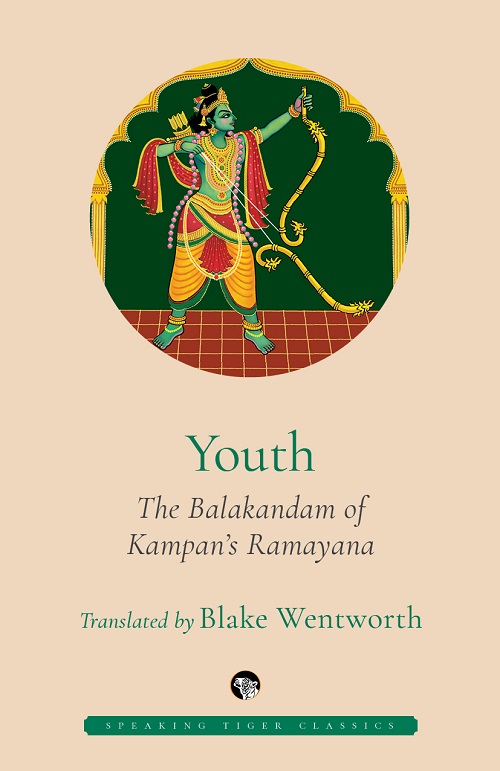 Composed in the 12th-century by Kampan, regarded by many as Tamil’s finest poet, the Kamparamayanam is perhaps the most splendid retelling of Valmiki’s Ramayana. This first regional retelling of the great Sanskrit epic is set firmly in Tamil country and draws from Puranic lore and Tamil literary masterpieces. The approximately 12,000 verses that make up the six books of the Kamparamayanam fully and unabashedly embrace Rama’s identity as a human avatar.

The first kandam, or book, of Kampan’s Ramayana is Balakandam, about the boyhood of Rama, who under the tutelage of Vishwamitra learns the lay of the land he will one day rule, as well as his true nature. This son of Dasharatha, along with his brother Lakshmana, reverses ancient curses of sages and gods, amasses powerful weapons, and protects the sacrificial rituals of the rishis from vicious rakshasas. In Mithila, he falls in love with Sita, the daughter of King Janaka. The chapters that follow describe—in a manner unique to early Tamil literature—the joyful procession of Dasharatha’s retinue to Rama and Sita’s wedding, and contain some of the most beautiful verses composed in any South Asian language. The book concludes with Rama’s first true test of manhood and a sign of the times that lie ahead: a conflict with the mighty Parashu Rama, an avatar, like Rama himself, of Vishnu.

Translated from the Tamil with great skill by Blake Wentworth, Youth brings the lyricism, the exquisite imagery and the wonderful sensuousness of Kampan’s masterpiece to modern-day English-language readers.