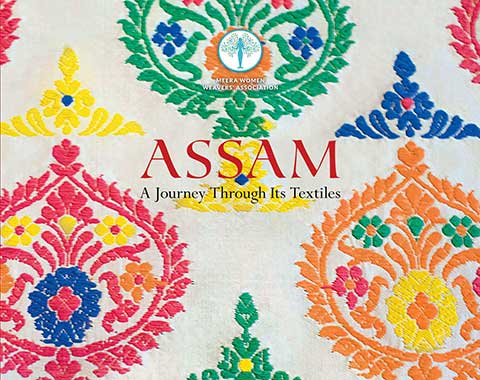 For centuries, Assam has been a melting pot of peoples—a ‘living museum of man’. Northeast India is an ethnic mosaic consisting of different tribal groups of various ethnic stocks, each with their own dialect, traditional customs and practices. Bodos represent nearly half of the tribal population, followed by Mishing, Karbis, Rabha, Sonowal Kachari, Lalung, and Deoris. The other smaller tribes are Chutia, Moran, Sonowal, Mech, Tiwa (Lalung), Garo, Sarania, Hajong, Tripuri, Deori, Thengal, Hojai, and Koch. In this multicultural constellation, textiles are an important point of reference. The spinning and handloom weaving tradition has a deep history and ancestry in Assam. The silks intrinsic to Assam (muga, eri, and paat), the typical handlooms and backstrap looms, the distinctive woven designs, and the characteristic modes of dress are expressions of the intangible heritage of Assam. The traditional dress of Assamese women is the two-pieced Mekhela and Chador and for ceremonial occasions, a third item called Riha. For formal occasions, people wear a headdress like the Bodo Joki. The ubiquitous Gamosha (white with red design) can be used both as a headdress as well as a utilitarian scarf. While written records are sparse, the oral traditions, folklore, music and the continuing and living traditions are testimony to the vibrant weaving practices and distinctive design heritage of Assam. Assam: A Journey Through Its Textiles serves an invaluable purpose in documenting through a meticulously researched text and more than 150 stunning photographs, the history of the textiles and tribes of this Northeastern state.