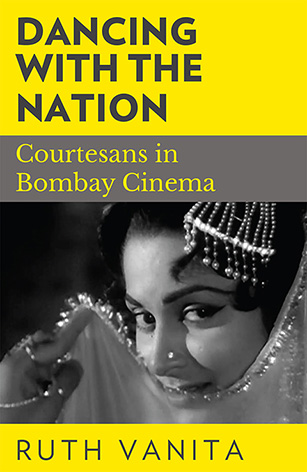 Dancing with the Nation

In Ruth Vanita’s study of over 200 films from the 1930s to the present—among them, Devdas (1935), Mehndi (1958), Teesri Kasam (1966), Pakeezah (1971), Ram Teri Ganga Maili (1985), Ahista Ahista (1981), Sangeet (1992) and Ishaqzaade (2012)—courtesan characters emerge as the first group of single, working women depicted in South Asian movies. Almost every female actor—from Waheeda Rehman to Rekha and Madhuri Dixit—has played the role, and compared to other central female roles, these characters have greater social and financial autonomy. They travel by themselves, choose the men they want to have relations with and form networks with chosen kin. And challenging received wisdom, in Vanita’s analysis of films such as The Burning Train (1980) and Mujhe Jeene Do (1963), courtesan characters emerge as representatives of India’s hybrid Hindu-Muslim culture rather than of Islamicate culture.

A rigorously researched and groundbreaking account of one of the less-examined figures in the study of cinema, Dancing with the Nation is also a riveting study of gender, sexuality, the performing arts and popular culture in modern India.