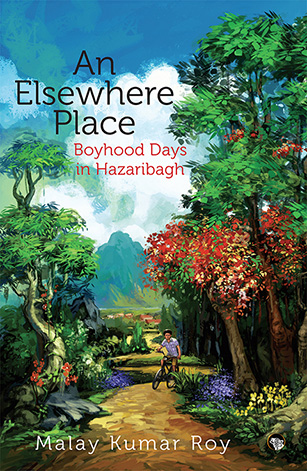 From the early 1950s to the early ’60s, Malay Kumar Roy spent around ten years as a young boy in Hazaribagh in the Chhotanagpur district of Jharkhand, which was then a part of Bihar. In An Elsewhere Place, Roy reminisces about his life there—a place that ‘touches a boy forever’. In this memoir, he vividly describes Hazaribagh’s tranquil landscape, its changing seasons and its unhurried pace of life. We get a glimpse of a time gone by from Roy’s stories about sharing a crate of mangoes with the last Englishman living in Hazaribagh; a little bear cub tipsy on mahua flowers; a gravely injured fox cub that was nursed back to health by him and his family, and a visitor from Calcutta who boasted about his detective skills and courage but lost steam upon seeing a dangerous criminal. And he revisits his schooldays at St Xavier’s School where his Jesuit mentors taught him the value of curiosity and discipline in life.

Written in charming, spare prose, this collection evokes a gentle, easy-going time when man and nature existed in harmony; a time of friendships, wonder and grace.