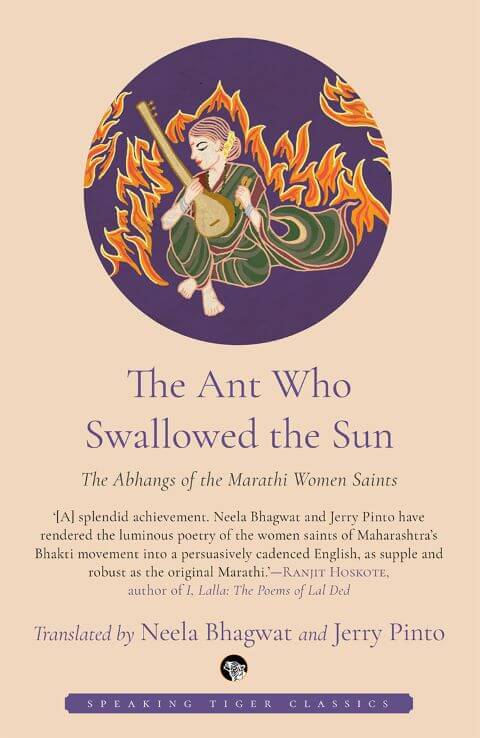 The Ant Who Swallowed The Sun

?Here is a unique moment in a region?s cultural and spiritual history in which a sex-worker and a domestic servant, a brahmin and a dalit woman, collectively staked their claim to the sacred?sometimes hesitantly, sometimes imperiously, but always feverishly and passionately.??Arundhathi Subramaniam, poet, seeker, editor of Eating God: A Book of Bhakti Poetry

The Bhakti movement, which began around the 6th century, transformed Indian thought in fundamental ways. It took seed in Maharashtra in the early 13th century in the form of the Warkari movement. With unmatched passion and eloquence the Warkari saint-poets spread the message of universal humanism combining it with a deep devotion towards Vitthal. The Ant Who Swallowed the Sun is a collection of translations of abhangs by ten prominent and lesser- known Marathi women-saints belonging to this movement.

These women came from diverse backgrounds: Muktabai was Saint Dynaneshwar?s sister; Janabai was Saint Namdev?s maid, Rajai his wife and Gonai his mother; Bahinabai was a brahmin trapped in a difficult marriage; Kanhopatra, a sex-worker; Soyarabai and Nirmala were from lower castes; and not much is known about Bhagu and Vatsara. At a time when women hardly had any autonomy, each claimed Vitthal as their own, addressing him variously as the divine, the lover or the friend. Their abhangs are not just expressions of devotion but offer a scathing criticism of patriarchy and caste hierarchies. With Neela Bhagwat and Jerry Pinto?s pitch-perfect translations, The Ant Who Swallowed the Sun is an important addition to Bhakti literature, as well as a delight for poetry lovers.