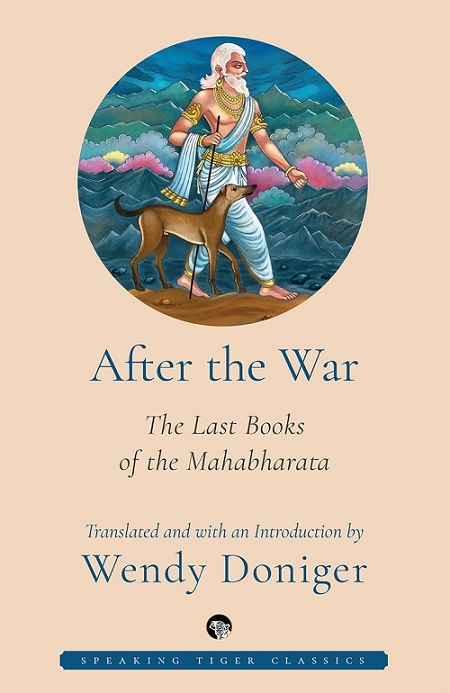 After the War: The Last Books of the Mahabharata

Composed sometime between 300 BCE and 300 CE, the Mahabharata‘s 75,000 verses narrate the legendary battle between two branches of the Kuru clan of North India, the Pandavas and the Kauravas, and its aftermath. Storytellers in all of South Asia and far beyond have entertained and instructed through this greatest of epics for generations past. But, as the translator says in her introduction, they have generally ‘underra[ted] the high emotion, mythological inventiveness, metaphysical complexities, and conflicted characters that animate the last books [which]…tell a unified and self-bounded story of their own’.

In Book Fifteen (Ashramavasika, Living in the Hermitage) a wild-fire consumes Kunti, King Yudhishthira’s mother, and Dhritarashtra and Gandhari, the parents of the Kauravas, living out their final days in the forest. But did they die a meaningless death? Fate catches up with all, even gods, in Book Sixteen (Mausala, The Battle of the Clubs), when Lord Krishna embraces death and his Yadava clan is annihilated in a drunken brawl and an attack by bandits, in fulfilment of Gandhari’s curse. It is time for the Pandavas to ascend to heaven, in Books Seventeen (Mahaprasthanika, The Great Departure) and Eighteen (Svargarohana, Climbing to Heaven), but not before Yudhishthira is tested by a dog, to ascertain his steadfastness in the moral law.

Bringing to bear her many years of study of the Mahabharata, Wendy Doniger renders the complex narrative in exceedingly lucid prose. The absorbing story and her masterful translation will appeal to the general reader and the scholar alike.