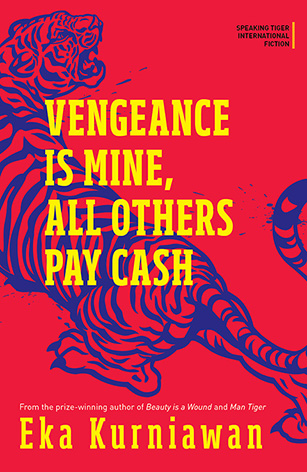 Vengeance Is Mine, All Others Pay Cash

Ajo Kawir and Gecko are lower-class Javanese boys in their early adolescence. Half-hearted students at the mosque down the road and curious about girls and sex, they spend most of their time riding their bikes and spying on fellow villagers in flagrante. Sent by his mother on a mission to bring food to Scarlet Blush, an old friend who has gone mad after the murder of her husband by some vigilante soldiers, Gecko discovers that the crazy woman is actually quite beautiful. He invites Ajo Kawir to spy on her with him one evening, and the boys end up witnessing her rape by two policemen. Deeply traumatized, Ajo Kawir is rendered impotent. Despite his handicap, Ajo Kawir becomes one of the toughest fighters in the Javanese underworld, his fearlessness matched only by his unquenchable thirst for brawling. When he finally meets his match in the shape of the fearsomely beautiful bodyguard Iteung, Ajo is left bruised, battered and overjoyed?he has fallen in love. But will he ever be able to make Iteung happy if he can?t make love like a man?

Vengeance Is Mine, All Others Pay Cash is a gloriously pulpy tale of bloody fists, broken hearts and duelling Jakarta truckers, from one of the most exciting and original voices in literary fiction today.