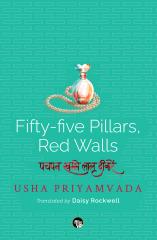 First published in 1961, Usha Priyamvada’s debut novel Pachpan Khambe, Laal Deewaarein is located within the boundaries of an all-women’s college in Delhi. Behind its walls is Sushma Sharma?lecturer, warden, single, and sole provider for her large family. Despite her relative youth and elegance, she is resigned to the regimented loneliness of her life, until a chance meeting with the charismatic Neel. Then, long-thwarted desires uncurl and the shackles she has accepted suddenly begin to seem unbearable. But the world around her is still unchanged, and independence still causes scandal?

In spare, evocative prose, Fifty-five Pillars, Red Walls skilfully explores the physical, mental and social paradigms which locked so many women into narrow ideals, as they still do. Daisy Rockwell’s pitch-perfect translation brings this quietly intense, poignant and pathbreaking Hindi novel into the blazing spotlight of classic Indian literature for the first time.

All these memories came flooding as I held a mint-fresh copy of the novel, which has been brilliantly translated into English by Daisy Rockwell, in my hands. I stayed awake all night as I read this well-told story, chronicling the dreams and disappointments of the ill-fated love affair of Sushma and Neel set in the vintage Delhi of the 60s.

The book deserves accolades for the foresightedness of its author, Usha Priyamvada who upheld a question that was not cut out of the usual feministic wailings a prevalent inclination in her contemporary writings, despite it being essentially a women-centric narrative.