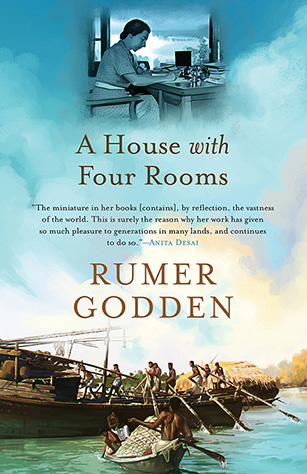 A House with Four Rooms

Rumer Godden’s follow-up to A Time to Dance, No Time to Weep—the evocative story of her childhood and adolescence in early twentieth-century India—A House with Four Rooms begins with her return to postwar England.

With characteristic honesty, wit and elegance, Rumer describes the London of the 1950s and trying to make a living as a writer along with raising a family. Through her unwavering commitment to the pen and steadily growing fame, she paints a fascinating picture of the literary and film world that came to fete her. She tells stories of her many houses, and her quest for a room of her own. She also recounts her travels to America, her time in India during the filming of The River with French director Jean Renoir, noting the presence of a young Satyajit Ray and almost falling prey to a misguided mob; the origins of her novels and their reception; and her relationship with James Haynes-Dixon, her second husband.

The record of an extraordinarily rich life keenly observed and brilliantly recorded, this autobiography is one to treasure.