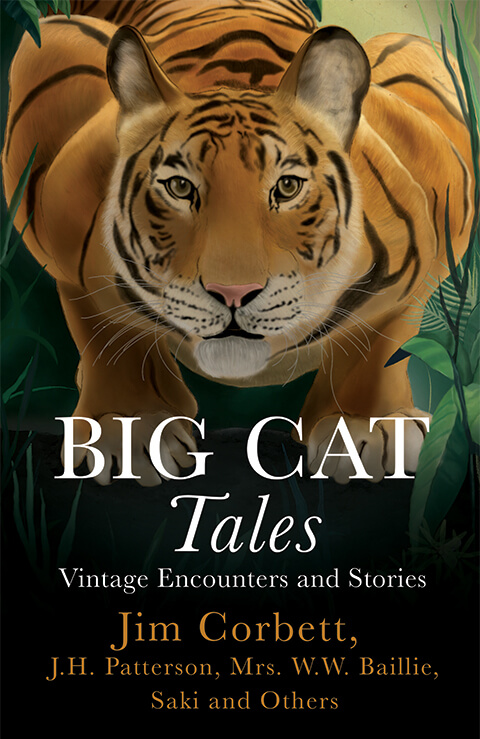 ?Pleasure at having secured a magnificent trophy was not unmixed with regret, for never again would the jungle folk and I listen with held breath to his deep-throated call resounding through the foothills, and never again would his familiar pug-marks show on the game paths that he and I had trodden for fifteen years.?

After fifteen years of watching him grow into youth and old age in the forests of Kumaon, Jim Corbett, the fabled hunter-naturalist and writer, shoots a tiger who has become a man-eater. His pleasure-mixed-with-regret at this victory which is also, in the end, murder is the central paradox that makes self-aware shikar literature a compelling exploration of our epic and imperfect existence. This collection of non-fiction and fiction about encounters between humans and big cats in the Indian subcontinent and Africa brings us the best of this genre of literature, with its gripping narratives, unforgettable images and splendid descriptions of wild nature.

Besides Corbett, it includes masters of the genre like J.H. Patterson, who writes about the terror of lions and men in Kenya during the laying of railway lines in the 1890s; Hugh Allen, who had thrilling adventures with tigers and leopards in central India; and Augustus Somerville, who wrote the neglected classic At Midnight Comes the Killer. There are also surprising gems: lyrical and humorous real-life and imagined stories by Mrs W.W. Baillie and Mrs M.A. Handley?two unusual women of the Raj; the naturalist EHA (a founding member of the Bombay Natural History Society); and writers Saki and Dhan Gopal Mukerji. And lest we forget that reluctant hunters were the exception and hunting was mainly about ?sportsmen? who delighted in chase and slaughter, there are also accounts of the horrors of shikar.

Compiled by a group of wildlife enthusiasts, this anthology showcases brilliant, old-fashioned storytelling, and some of the finest writing on adventure and wildlife produced over a century.