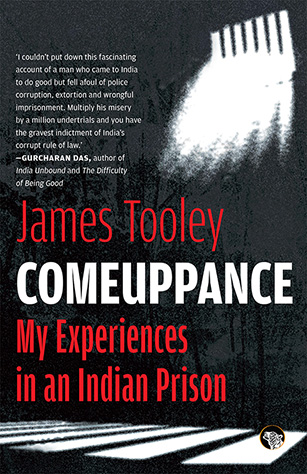 In March 2014, James Tooley, a champion of low-cost private schools across South Asia and Africa, was enjoying a well-deserved break in Hyderabad, reunited with his girlfriend Sara and niece Alissa. One evening he was visited by the ‘friendly’ Mrs Mantra, Deputy Superintendent, CID who was concerned about alleged irregularities in the funding of his NGO, the Educare Trust. Tooley clarified that he had already given a statement to the CID and shut the NGO down years ago. However, not to be brushed off, Mantra returned to his hotel later that night—this time with a posse of subordinates—to arrest him without a warrant. Conditions in prison were dire, and the jailers typically cruel and violent, but the other prisoners were extraordinarily kind. Appallingly, many had been inside for years, never charged with anything, often victims of police corruption and too poor to go to court.

In this disturbing yet gripping book, Tooley recounts his time in prison and his Kafkaesque struggle against Indian bureaucracy. Even after securing bail, he was subjected to humiliating interrogations, threats from armed goons and demoralizing visits to the court. A searing memoir and a chilling indictment of the Indian prison system, the police, and the judiciary which allows them discretion to act with impunity, Comeuppance: My Experiences in an Indian Prison is a timely reminder about the terrifying reality of twenty-first-century India.