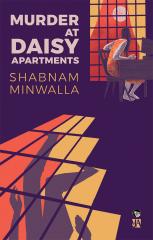 Colaba, May 2020; Lockdown, Day 46: Baman Marker, the Chairperson of Daisy and Lily Apartments, is found poisoned in his home. He dies soon after. The twin apartments are sealed, so the murderer could have only been one of the residents.

The news shakes fifteen-year-old Nandini Venkat, a devourer of murder mysteries, out of her stupor. After all, didn’t she spot a pair of legs climbing up and down the stairs that deadly night… With her not-so-alert twin, Ved, and BFF Shanaya, she begins an investigation.

But the Chairperson knew every little dirty detail about every single resident, so the list of suspects is long. Was it Mr Carvalho—Nandini’s crush Daniel’s father—with his shady past? Or Shanaya’s mother, Amrita Aunty, who had a running feud with Baman? Or mean old retired principal Lina Almeida who now makes lethal detox smoothies? Or the old and immobile Mr Alimchandani with a long-buried secret?

The seemingly listless days of the lockdown, when secrets and tensions bubbled below the surface, come back to life in this gripping and entertaining whodunit. With Murder at Daisy Apartments, bestselling author Shabnam Minwalla brings her phenomenal gift for dramatic storytelling to a new genre.