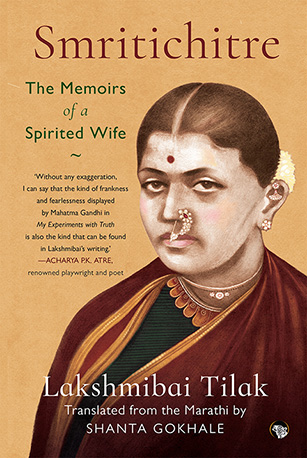 Lakshmibai Tilak was born in 1868 into a strict Maharashtrian Brahmin family in a village near Nashik. And at the age of eleven, she was married off to poet Narayan Waman Tilak, a man much older than her. In Smritichitre, Lakshmibai candidly describes her complex relationship with her husband—their constant bickering over his disregard for material possessions, which quite often left them penniless, and his bouts of intense rage in these moments. But at the core of their relationship was their concern for society and the well-being of every human being, irrespective of caste, class or gender, and their unwavering devotion to each other. Equally touching is her recounting of his conversion to Christianity which led to a separation of five long years. After their reunion, she, too, was gradually disillusioned with orthodox Hindu customs and caste divisions, and converted to Christianity. After Narayan Tilak’s death in 1919, she came into her own as a matron in a girls’ hostel in Mumbai and later gathered enough courage to move to Karachi with her family. When first published in Marathi in 1934, Smritichitre became an instant classic. Lakshmibai’s honesty and her recounting of every difficulty she faced with unfailing humour make Smritichitre a memorable read. Shanta Gokhale’s masterly translation of this classic is the only complete one available in English.