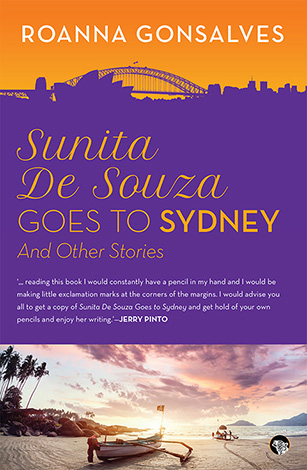 A woman who can’t swim wades into a suburban pool. An Indian family sits down to an Australian Christmas dinner. A single mother’s offer to coach her son’s football team leads to an unexpected encounter, and a wife refuses to let her husband look at her phone. Roanna Gonsalves’ short stories unearth the aspirations, ambivalence and guilt laced through the lives of twenty-first century Indian immigrants to Australia, steering through clashes of cultures, trials of faith, and squalls of racism. Sometimes heart-wrenching, sometimes playful, they cut to the truth of what it means to be a modern outsider.

Since its publication, Sunita De Souza Goes to Sydney has quickly found a place on a number of lists of must-read books, and has been praised by critics for its playfulness with language, its boldness and its fresh voice.