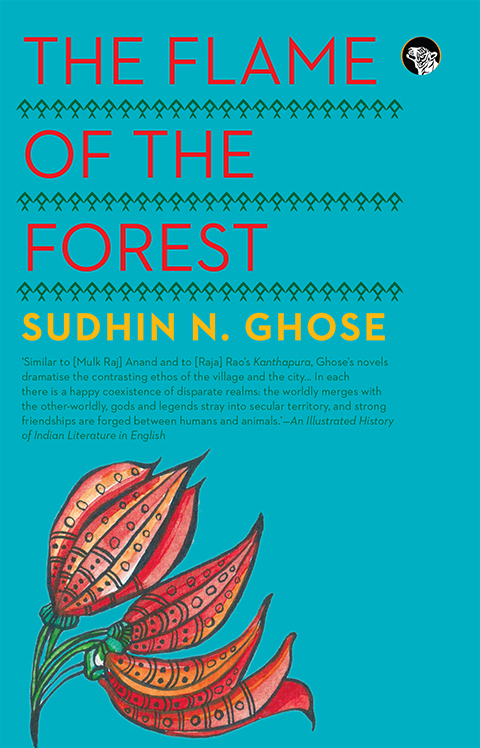 The Flame of the Forest

‘[Myna]…moved as though sustained by invisible wings attached to her feet. Her whole frame glowed like an incandescent bronze figure. And I recalled that Myna’s name before she became a kirtani was the Flame-of-the-Forest…’

A young scholar in post-Independence Calcutta finds that his life is in the doldrums. He cannot secure a job despite having completed his education with flying colours. Unwilling to steady his drifting, his lover has abandoned him. And, increasingly put off by the clamour for ‘progress’ among the newly liberated city-folk around him, all of whom are quick to dismiss tradition, he finds himself drawn to Myna, a kirtani who believes she is a handmaiden to Radha, Lord Krishna’s consort. In his attempts to make a living, he writes frivolous articles for an American magazine and acts as a part-time secretary to his mentor, the Diwan, a political moderate with waning influence. But when Ek Nambur, a demagogue and Diwan’s political rival, puts the latter under house arrest and comes after the young man, he is forced to make a choice. He can stay on to fight a losing battle or take up Myna’s invitation to join her and become a fellow pilgrim.

A sumptuous tapestry of myth, history and legend, The Flame of the Forest is the story of a young adult forced to choose between tradition and modernity, and take up the responsibility of moulding his own life. The concluding novel in Sudhin N. Ghose’s classic quartet, The Flame of the Forest was published in 1955 and is being reissued for the first time in more than half a century.