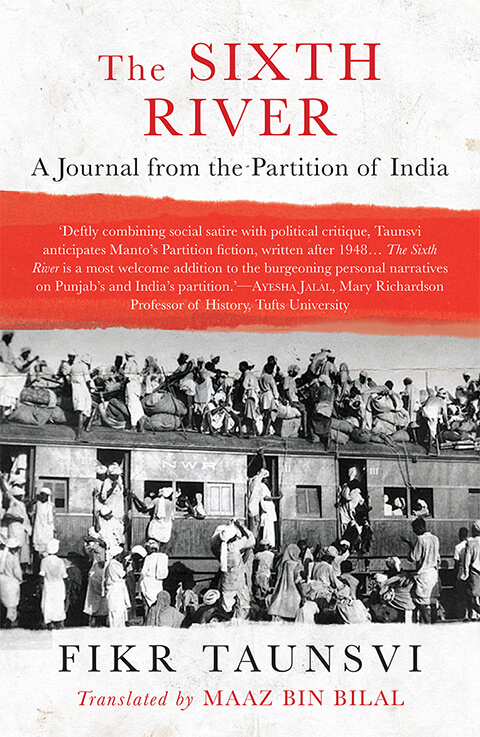 The Partition of India in 1947 left millions displaced amidst indiscriminate murders, rapes and looting. The Sixth River, originally published as Chhata Darya, is an extraordinary first-person account of that violent time. Born Ram Lal Bhatia in the town of Taunsa Sharif, then in the Punjab, Fikr Taunsvi left for the cosmopolitan city of Lahore in the 1930s. Here he worked with various newspapers, wrote poetry and articles, and became a part of the intellectual circle. But when independence was announced, Fikr was faced with a new reality—of being a Hindu in his beloved city, now in Pakistan. The Sixth River is the journal Fikr wrote from August to November 1947 as Lahore disintegrated around him. Fikr is angry at the shortsightedness and ineptness of Radcliffe, Nehru, Gandhi and Jinnah. In the company of likeminded friends such as Sahir Ludhianvi, he mourns the loss of the art and culture of Lahore in the bloodlust and deluded euphoria of freedom; and derides the newly converted, who adopted stereotypical religious symbols. He is bewildered when old friends suddenly turn staunch nationalists and advise him to either convert or leave the country. And the deep, unspeakable trauma millions faced during Partition reaches Fikr’s doorstep when his neighbour murders his daughter, and when he is eventually forced to migrate to Amritsar in India. Powerful, ironic and deeply harrowing, The Sixth River is an invaluable account of the Partition. This brilliant translation by Maaz Bin Bilal makes the classic available in English for the first time.