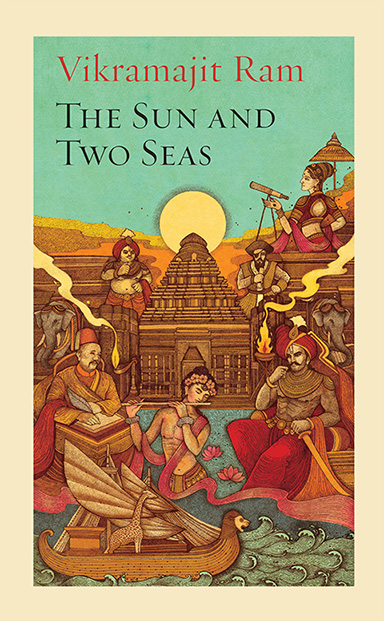 The Sun and Two Seas

It is the thirteenth century AD. The kingdom of Kalinga is flourishing, having recently defeated Turkish forces encroaching from the North and established thriving ties as far afield as Africa. King Narasimha Ganga plans to immortalize himself by building the magnificent Sun Temple at the edge of the sea. However, unable to decide on the perfect design, and beset by financial woes, he decides to focus on something more congenial: sending a royal gift of prime cattle to an African Sultan. Meanwhile, his neglected consort searches for solace by studying the stars, and her young cousin drifts aimlessly through the palace, playing the flute and flirting with handsome soldiers. When Narasimha’s childhood friend, the Crown Prince of Parijatapuri arrives, pursued by a band of assassins, to keep him out of harm’s way, Narasimha dispatches both him—as his Envoy—and his feckless cousin-in-law—as Superintendent of the Cattle—on the voyage to Africa. They must deliver the cattle and bring back a zarafa, an exotic four-legged animal with ‘the neck of a snake’ which, according to the half-Chinese Royal Scrivener, is ‘a harbinger of fortune and serenity’. Before the voyage is over, all the characters are transformed as they juggle clandestine love affairs and treasonous plots, endure arduous journeys and have terrifying encounters with unknown monsters.

Written in lush, vivid prose, leavened by wry humour, and teeming with memorable characters, The Sun and Two Seas is an enchanting read.