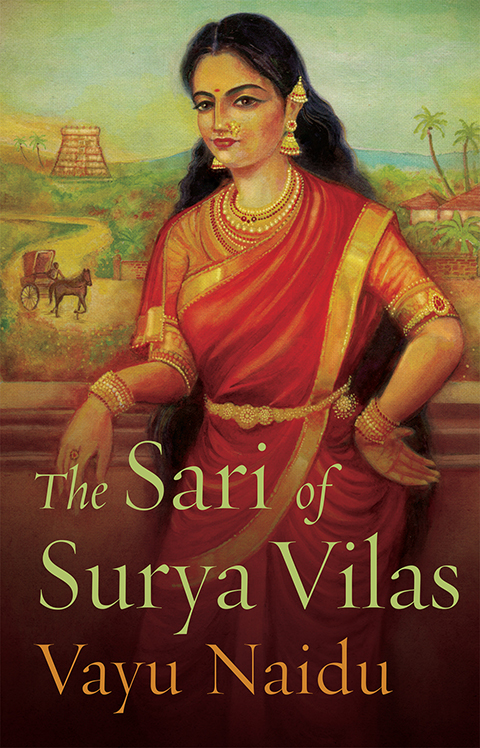 The Sari of Surya Vilas

Allarmelu took out the sari that belonged to her mother, her mother’s mother, and her mother before that. All she wanted now was not a long chain of dead mothers but her mother, alive. She breathed deep, hoping for a waft of her mother’s musk. But this sari did not have the fragrance of sandalwood and frankincense mixed with turmeric. Her heart skipped a beat. […] The sari on her lap was an imposter!

1909: Allarmelu is nine years old when her mother dies, leaving her in Surya Vilas, the family home, which has turned into a world of spinster aunts and men. When she discovers that her mother’s wedding sari, an heirloom passed from mother to daughter, is missing, Allarmelu must track it down—without revealing that it was stolen by a family member. Tracing the sari sends her into a world never mentioned in genteel company, of exotic Russian dancers and unacknowledged mistresses. But puberty and the changing urban landscape of Madras make Allarmelu challenge the complacent silences of family and British rule alike.

1857: Sari looms are set alight on the Coromandel Coast and weavers murdered. The East India Company ships an orphaned to England, to work as a governess. Born Chandrika, and converted to Christina, she carries a sari woven with the symbols of an incendiary past that she must strive to forget. However, she finds the words to narrate her experiences through working with in the Philological Society, leaving a secret that will only be unravelled in the next century.

In her new novel, Vayu Naidu tells the poignant story of a woman finding her voice against the backdrop of family secrets, betrayals and promises. In a compelling narrative, rich with period detail, The Sari of Surya Vilas traces the silenced voices of marginalized people across Madras and the Deccan, who nevertheless left a mark on history—woven, told and sung, worn and passed on, bearing the residue of their passionate experiences.