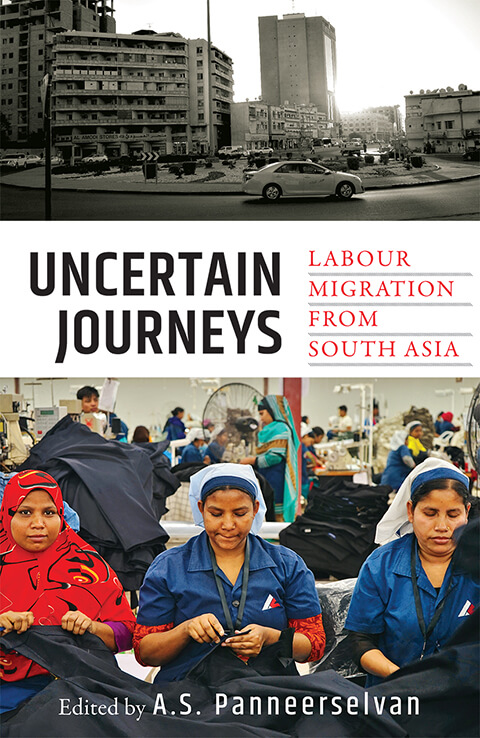 ‘The essays in Uncertain Journeys: Labour Migration from South Asia document the price people pay to earn a dignified livelihood, as well as the joy and pain of distance employment. They […] help us to understand the labour migrant from South Asia as a human being, and not a mere remittance machine for the family or a precious foreign-exchange earner for the home country.’—From the introduction by A.S. Panneerselvan

The topic of labour migration appears constantly in the media, but too often, the issues take precedence over the people involved—the migrant workers who leave Bangladesh, India, Nepal, Pakistan and Sri Lanka, to work long hours in precarious situations across the Middle East and Southeast Asia. Here, eleven journalists explore the lived realities of migrant workers from South Asia—their aspirations, fears and dreams; how global forces determine their freedom; how they navigate the policies that attempt to regulate their lives; and their hopes for a better future which carry them through years of unrelenting toil.

Uncertain Journeys asks fundamental questions about the nature and costs of labour migration. Essays about the plight of Indians stranded in Kuwait due to bankrupt employers query whether labour-sending countries can assume that their responsibilities to their citizens abroad end with enabling remittances. The horrifying stories of men and women suffering forced labour, abuse and de facto imprisonment demand whether the blurred borderlines between migration and human trafficking effectively enable modern-day slavery. Most crucially, the book questions whether human beings can be reduced to a mere commodity.

Written with empathy, yet with a critical take on the stories being told, this book is an important contribution to the conversation about labour migration in South Asia.