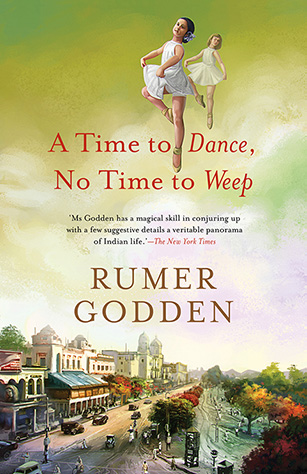 A Time to Dance, No Time to Weep

In this sensitive and superbly crafted memoir, one of the foremost English-language authors of modern times, Rumer Godden, chronicles her early life in India and England.

She paints a vivid picture of her childhood, in the early 1900s—in Narayangunj, a village in undivided Bengal, where her father worked with the Brahmaputra Steam Navigation Company—and her early forays into writing. She movingly recounts the pain of being forced to return to England to complete her education, and the horrors of being bullied by teachers and older girls in a convent; but also her joy at finding a mentor who encouraged her writing. After her return to India in 1925, life continued to be tumultuous—she faced social censure for allowing Anglo-Indian children in her dance school in Calcutta; and her marriage with a stockbroker, Laurence Foster, was an unhappy one. The unexpected success of Rumer’s first novel, Black Narcissus, left Laurence insecure and he deserted her and their two daughters. Rumer’s courage and resilience shine through as she writes about her decision to pay off her husband’s debts and to move to Kashmir with her daughters; there they lived in a houseboat till Rumer bought an abandoned house, and began making a living by selling vegetables and medicinal herbs from her garden. But just as they were getting used to life in Kashmir despite hostility from the locals, a catastrophe forced them to return to London.

Bursting with vibrant imagery and a love for life, A Time to Dance, No Time to Weep is an unforgettable account of the unconventional life of a celebrated writer and also of India under British rule.