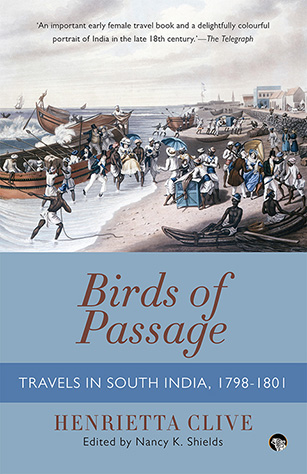 ‘An important early female travel book and a delightfully colourful portrait of India in the late 18th century.’—The Telegraph

Lady Henrietta Clive, a feisty, independent-minded traveller, married to Lord Edward Clive, son of Clive of India and Governor of Madras from 1798 to 1803, lived in Madras and travelled through southern India with her daughters and retinue in the aftermath of the war against Tipu Sultan. In this volume, Nancy Shields skilfully interweaves extracts from Henrietta’s journals with passages from the diary of Charly, Henrietta’s precocious twelve-year-old daughter, who went on to tutor the future Queen Victoria.

Important as a historical and social document, and also as an early female travel text, Birds of Passage is illustrated with watercolours by Anna Tonelli, who accompanied the party on their voyage.