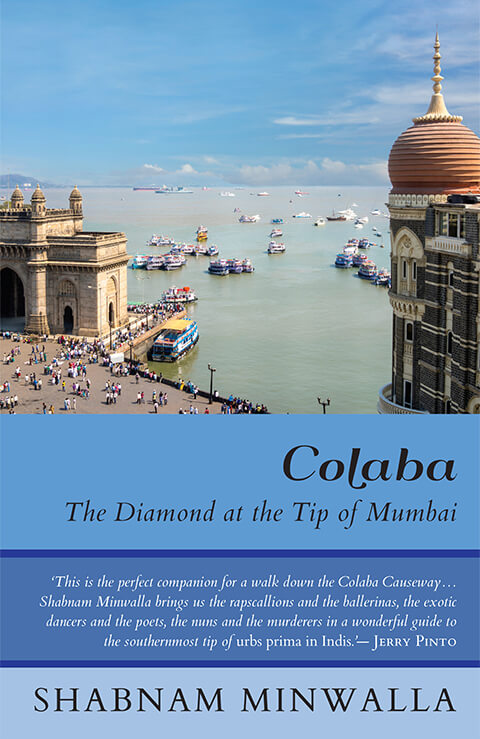 Colaba, the southernmost tip of Mumbai—a bustling locality with the Gateway of India, the famous Taj Mahal Hotel, and Colaba Causeway, a shopper’s paradise—is the city’s most iconic neighbourhood. But barely 200 years ago, it was a rocky, jackal-infested island, separated from the rest of the great metropolis by a temperamental creek. In this compelling biography, Shabnam Minwalla, journalist, author and long-time resident of the area, tells the tale of the unexpected forces that reshaped land and sea; and allowed this remote corner of Bombay-Mumbai to evolve into one of its liveliest, quirkiest neighbourhoods.

Trying to figure out the exact area limits, she unravels accounts of colonial rivalries and dowry negotiations, and of shrewd industrialists who transformed the doomed island into the centre of trade during the cotton boom of the 1860s. She navigates the sometimes charming, sometimes seedy streets to track the area’s evolution from a retreat for British soldiers and sailors to a coveted residential area for the English and Indians alike. She digs into her childhood memories to introduce us to the eccentric Parsis of Cusrow Baug, the warm yet persistent shopkeepers and hawkers of the Causeway, the industrious Sindhis who pioneered co-operative housing societies, the colourful musicians, theatre artists and writers who frequented her corner of Colaba, and the Arabs who come there every year to witness the city’s monsoons. And in a moving section, she records how the neighbourhood rose like a phoenix from the ashes after the 26/11 terrorist attack.

Combining a remarkable flair for storytelling with sound journalistic groundwork, and drawing upon three generations of family memory, Shabnam paints an intimate and dynamic portrait of a great and fabled neighbourhood.

The best stories come from the author herself, memories of Colaba haunted houses, lingerie shops that date back to before the word lingerie arrived in Colaba, glimpses of a prim schoolgirl, one of a horde, who transformed into hoydens tumbling down the staircase the instant the evening bell rang, only to be harangued on the way home by the fierce battleaxes of Cusrow Baug. Biographical details are introduced not in a self-congratulatory or coy manner or even in bland lists, but in a festive jumping-about that interweaves energetic adjectives, provides vivid pictures, and sometimes has you laughing aloud. The creative happiness is impressively balanced with deep, fault-finding, nit-picking research into this unabashedly grimy district of India’s financial capital.