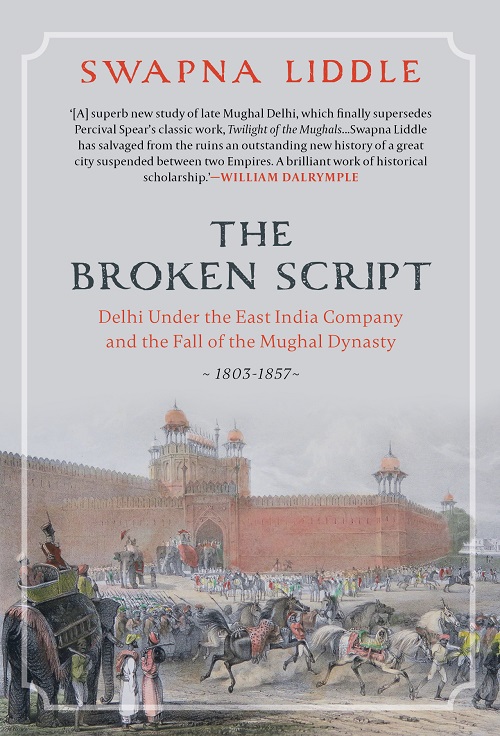 ‘A superb new study of late Mughal Delhi, which finally supersedes Percival Spear’s classic, Twilight of the Mughals… Swapna Liddle has salvaged from the ruins an outstanding new history of a great city suspended between two Empires. A brilliant work of historical scholarship.’—William Dalrymple

At the start of the nineteenth century, there was a Mughal emperor on the throne in Delhi, but the Mughal empire, in decline for almost a century, was practically gone. A new power had emerged—the British East India Company, which captured the Mughal capital in September 1803, becoming its de facto ruler. Swapna Liddle’s book is an unprecedented study of the ‘hybrid half-century’ that followed—when the two regimes overlapped and Delhi was at the cusp of modernity, changing in profound ways.

With a ground-level view of the workings of early British rule in India, The Broken Script describes in rich detail the complex tussle between the last two Mughal emperors and the East India Company, one wielding considerable symbolic authority, and the other a fast-growing military and political power. It is, above all, the story of the people of Delhi in this period, some already well known, such as the poet Ghalib, and others, like the mathematician Ram Chander, who are largely forgotten: the cultural and intellectual elite, business magnates, the old landed nobility and the exotic new ruling class—the British. Through them, it looks at the economic, social and cultural climate that evolved over six decades. It examines the great flowering of poetry in Urdu, even as attempts to use the language for scientific education faltered; the fascinating history of the Delhi College, and how it represented a radically new model for higher education in India; the rise of modern journalism in Urdu, and various printing presses and publications, exemplified by papers like the Dehli Urdu Akhbar; and the founding of remarkable institutions like the Archeological Society—all of which point to a fast-modernizing society that was being shaped to a significant extent by Western ideas and institutions, but was also rooted strongly in indigenous systems of thought and learning.

The Revolt of 1857 and its aftermath violently disrupted this distinctive modernity. The book draws upon a variety of records—including Urdu poetry written after the revolt was brutally suppressed, proceedings of the trials conducted by the British, private letters and newspaper reports—for a nuanced examination of the events of 1857, challenging many commonly held and often simplistic assumptions. In the process, it details not only the destruction wreaked upon Delhi, but also strategies for survival and early attempts to rebuild and revive individual lives and institutions.

Combining immaculate scholarship with extraordinary storytelling, Swapna Liddle has produced an outstanding book of narrative history—on a great city in transition, and on early modern India—that will be read and discussed for decades.