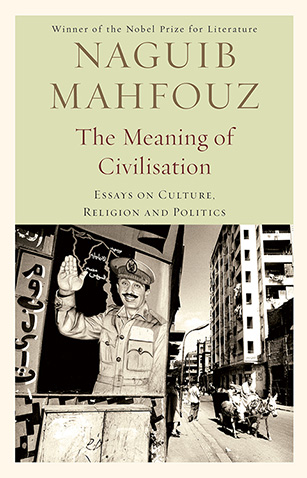 The Meaning of Civilisation

When Naguib Mahfouz left his job as a civil servant in 1971, a Nobel Prize in literature was nowhere on the horizon, nor was his global recognition as the central figure of Arab literature. He was just beginning a new job on the editorial staff of the Egyptian newspaper Al-Ahram, and elsewhere in Cairo, Anwar Sadat was just beginning his hugely transformative Egyptian presidency, which would span eleven years. The Meaning of Civilisation is a collection of essays that captures one of Egypt’s most important decades in the prose of one of the Middle East’s most important writers. It stitches together a fascinating and vivid account of the dramatic events of the time, from Egypt’s break with the Soviet Union to the Yom Kippur War with Israel and eventual peace accord and up to Sadat’s assassination by Islamic extremists in 1981.

Through this tumultuous history, Mahfouz takes on a diverse array of political topics—including socioeconomic stratification, democracy and dictatorship, and Islam and extremism—which are still of crucial relevance to Egypt—and the world—today. Clear-eyed and direct, the pieces illuminate Mahfouz’s personal and political convictions, which were more often hidden in his novels, enriching his better-known corpus with social, political, and ideological context.

This collection is a rare treasure, a story of a time of tremendous social and political change in the Middle East, told by one of its most iconic authors.