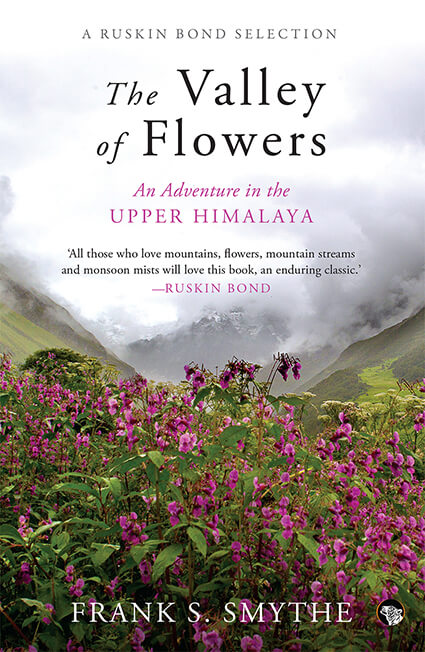 The Valley of Flowers

‘The predominant note was peace; not the faintest breeze ruffled the herbage and the silence was the silence of a vast ocean utterly calm, though always the sounds of the streams came to the ear as a soft, almost imperceptible cadence.’

In 1931, a party of British mountaineers—including Frank S. Smythe—on their way back from a successful ascent of Mount Kamet, were looking for shelter from inclement weather in the wilderness above Joshimath in present-day Uttarakhand when they came upon the lush and colourful Bhyundar Valley, the Valley of Flowers. In the monsoon of 1937, Smythe returned to the Valley with four Tibetans from Darjeeling—his climbing partners and factotums—provisions, and six weeks of leisure. On this adventure, Smythe extensively explored the Valley, identifying and collecting flowers and seeds from among the wealth of plant life. He and his friends also scaled the Nilgiri Parbat and the Mana Peak and were defeated by Mount Rataban. Beset by the rains, the party was nearly always soggy and, once, an Abominable Snowman gave them the fright of their lives. Yet, these were but minor prices to pay for the privilege of witnessing the Himalaya in its infinite variety and for a great deal of time usefully spent ruminating on the joys of idleness.

The very best kind of nature and adventure writing, which vividly captures the exuberance of wide open vistas as well as the opportunities for solitude and introspection they provide, The Valley of Flowers is a book to read, and to keep dipping into.