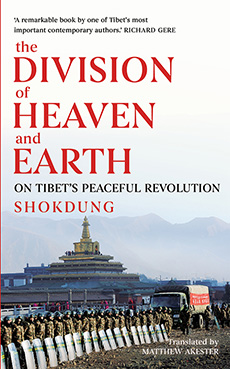 The Division of Heaven And Earth

The Division of Heaven and Earth is one of the most influential and important books from Tibet in the modern era—a passionate indictment of Chinese policies and an eloquent analysis of the protests that swept Tibet from March 2008 as a re-awakening of Tibetan national consciousness and solidarity. Publication of the original Tibetan edition saw Shokdung (a pseudonym), one of Tibet’s leading intellectuals, imprisoned for nearly six months, and the book immediately banned. This English translation is being made available for the first time since copies began to circulate underground in Tibet.

Written in response to an unprecedented wave of bold demonstrations and expressions of Tibetan solidarity and national identity, Shokdung’s book is regarded as one of the most daring and wide-ranging critiques of China’s policies in Tibet since the 10th Panchen Lama’s famous ‘70,000-character Petition’ addressed to Mao Zedong in 1962.