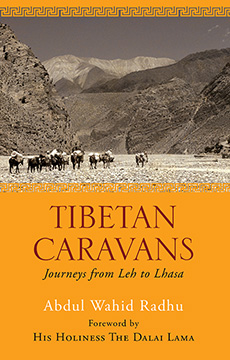 Born into an eminent merchant family in Ladakh in 1918, Khwaja Abdul Wahid Radhu, often described as ‘the last caravaneer of Tibet and Central Asia’, led an unusual life of adventure, inspiration and enlightenment. His family, and later he, had the ancestral honour of leading the biannual caravan which carried the Ladakhi kings’ tribute and homage to the Dalai Lama and the Tibetan government. Tibetan Caravans, his memoir, is an unparalleled narrative about trans-Himalayan trade—the riches, the politics and protocol, the challenging yet magnificent natural landscape, altitude sickness, snow storms, bandits and raiders, monks and soldiers. The book also contains rare and fascinating details about the close connections between Ladakh, Tibet and Kashmir, the centuries-old interplay between Buddhism and Islam in the region, the Chinese occupation of Tibet, and life in Lhasa before and after its takeover by China. In this rich and insightful memoir, Abdul Wahid Radhu reminisces about a bygone era when borders were fluid, and mutual respect formed the basis for trade relations across cultures and people. As his son, Siddiq Wahid, says in his introduction, Tibetan Caravans is a testimony to the organic relationships between ‘societies who have learned how to hear each other out, argue, even do battle and yet remain hospitable to each other.’